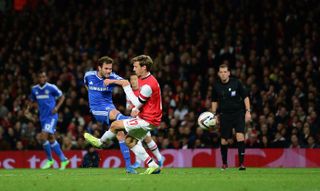 The Spain international was starting just his sixth game of the season, but grabbed his first goal of the campaign midway through the second half to seal his side's victory.

Cesar Azpilicueta scored a first-half opener at the Emirates Stadium, pouncing on Carl Jenkinson's error to extend Chelsea's winning run over their London rivals in the League Cup to four games.

After the game, Mata insisted he remains content with Jose Mourinho's apparent unwillingness to utilise him regularly.

"I just try to play and enjoy my football," he told Sky Sports.

"The manager is the one who makes the decisions. I always try my best for this club and today I really enjoyed it.

"I'm very proud for the fans here and at home. It's a pleasure for me and for us to play here with a lot of supporters and I'm really happy.

"Looking at our opponents this week, Manchester City and Arsenal, they are two of the best teams in Europe right now and we beat them so we are ready to fight for titles.

"Arsenal are a team that try until the end and create a lot of chances with the likes of (Santi) Cazorla, (Aaron) Ramsey and (Olivier) Giroud, so it was an important goal."

Meanwhile Azpilicueta, who claimed his first goal in Chelsea colours, admitted he had found himself in an unusual position, after springing forward to pounce on Jenkinson's error.

He quipped: "I don't know if I am allowed that far forward!

"But I felt there was a chance to score so I arrived there. I really enjoyed scoring here in a derby against Arsenal, it's always a pleasure to score."