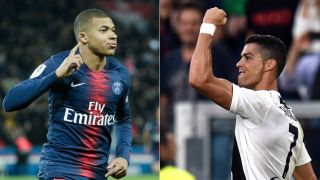 Paris Saint-Germain star Mbappe has developed into one of the world's finest attacking players over the past three years and is one of the leading candidates to win this year's Ballon d'Or, having lifted three domestic trophies at club level and the World Cup in 2018.

Matuidi thinks the 19-year-old has the self-confidence and persona to become a true great in the game.

"It is his personality. It's the player he is," Matuidi told a news conference when asked about Mbappe's forthright nature.

"Kylian will be a great player. He is already. He is doing big things. It's good; we need players like him. So, I encourage him to stay like that."

Matuidi was speaking ahead of France's Nations League clash with Netherlands on Friday, when a draw will be enough to send Didier Deschamps' side into next year's finals.

However, the Juventus midfielder is wary of underestimating a side who beat Germany 3-0 in their last competitive outing.

"I think we have to defend well," he said. "Netherlands scored three goals against Germany. They have many qualities, especially defensively. We have to be good in every aspect.

"We have to stay solid. That's one of our qualities. We have players who can make the difference. We are able to keep the ball and make the game difficult for our opponents. They can be dangerous but France can also be dangerous. We have talented players to make things difficult for them."

Tottenham's Moussa Sissoko was rewarded for some good recent club form with a call-up to the squad, and Matuidi is delighted to see the midfielder's determination rewarded.

"Moussa is a warrior," he said. "He never gives up. He is my friend. He had some difficult moments but he always told me that he would never give up.

"He is doing great with Tottenham. He performs, so he deserves to be here with France. I am happy to be with him again. I think he is a warrior. He deserves what is happening."