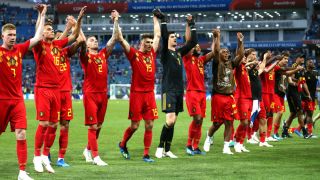 Roberto Martinez knew what was coming.

He stressed the importance of patience from his World Cup contenders. The Belgium boss wanted a mature performance against a Panama side he refused to underestimate.

Panama – the debutants with nothing to lose and all to gain on a historic day after coach Hernan Dario Gomez playfully promised to drink two bottles of vodka if the newcomers somehow managed to make it out of Group G.

And it unfolded just as Martinez predicted, despite Romelu Lukaku's quickfire brace and a mesmerising volley from Dries Mertens giving the appearance of a comfortable 3-0 win in Sochi on Monday.

It was frustrating and physical, but the star-studded Red Devils showed the calmness and maturity needed to move past the quarter-finals of a major tournament having reached that stage at the 2014 World Cup and Euro 2016.

Eden Hazard bore the brunt of Panama's physicality – the captain, while lively in the closing 45 minutes, taken out of the game before the interval.

This means so much to .If you want proof... one lady was in tears as the national anthem was played.Goosebumps!June 18, 2018

Kevin De Bruyne's impact was minimal, Lukaku was isolated and Jan Vertonghen was seen gesturing unhappily towards his team-mates.

Panama, who dramatically denied the Unites States from qualifying for Russia, were value for money – their every move approved by a passionate and deafening contingent whose support never waned.

Doubts emerged after a goalless first half, but Belgium answered such concerns swiftly.

A moment of magic from Mertens finally unshackled Belgium, his show-stopping volley two minutes into the second period easing the nerves.

Thibaut Courtois came to the rescue to keep Belgium ahead and while Panama remained a threat – undaunted by the occasion – the quality of the Red Devils showed.

Belgium's superstars came to the fore, the outside of De Bruyne's boot picking out Lukaku. Hazard then teed up the Manchester United striker six minutes after.

There were areas of concern for Belgium – now 20 games unbeaten – particularly in defence, but with Vincent Kompany making fast progress in his return from injury, this could be the year the country's golden generation finally fulfil their potential.