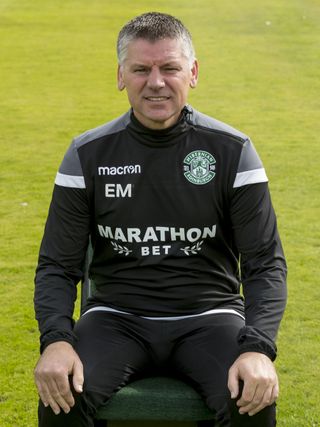 A hat-trick from Christian Doidge, scoring his first league goals for the club since signing in the summer, and a Scott Allan strike eased the Easter Road club to a comfortable 4-1 win against St Johnstone, who netted in the last minute through Stevie May.

May, head of player development at Hibs, was placed in charge on Monday following the sacking of Paul Heckingbottom and made five changes to the team who lost 5-2 to Celtic in a Betfred Cup semi-final last Saturday.

And the youth coach revealed afterwards that he was seeing Hibs in the flesh for the first time this season at McDiarmid Park.

With former Leeds, Liverpool and Australia forward Harry Kewell, who has expressed an interest in the vacant Hibs job, watching from the stand, May said: “The players have set a standard today. Hibs should be at the top end of the table rather than where they are currently.

“It’s three points but it gives us another platform to go and play against Motherwell in the coming weeks to then go and try to get closer to them.

“It should give the players a lift because of the standard of play.

“One thing I will say is I’ve never watched Hibs all season, so if that (performance) is not normal I don’t know.

“I chose not to go and watch them because I’m in charge of running the academy. If they’ve played exceptionally well today and not in other games then we’ll just ask the question, ‘can they maintain it?’.

“I’m sure the boys will try their utmost to keep that standard.

“I’ve not been to one game. The last Hibs game I was at was last season when they got beat 2-1 from Aberdeen in the last game.

St Johnstone manager Tommy Wright bemoaned his side’s defensive display after they followed up back-to-back victories with a frailty that saw them drop to second bottom in the table.

He said: “You can’t win football matches and make mistakes the way we did. The first goal shouldn’t happen.

“We actually started the game all right, on the front foot, but they broke our attack down, one long ball up the pitch and we don’t deal with it.

“Then we’re 1-0 down, Hibs get a bit of swagger about them for 20 minutes where they looked really good.

“Even at 2-0 we got into good opportunities and at half-time we said we would get chances against them, but again we gifted them the third goal.

“The goals were all too easy from our point of view, bearing in mind I thought Hibs were good. But from my point of view, particularly goals one and three were easily preventable.

“We’ve found in this league the first goal is all important and when you give a team with the quality they’ve got that early lead it’s a difficult afternoon.”