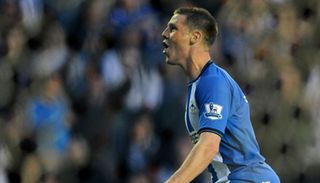 Wigan are huge underdogs to beat Manchester City at Wembley on Saturday and are favourites to become the third relegated team this season with an away game against Arsenal on Tuesday followed by a home clash with Aston Villa on the final day of the season.

The situation looks bleak for Wigan, whose manager Roberto Martinez is being linked with the soon-to-be vacant manager's seat at Everton, but McArthur is still hopeful.

"There's no reason why we can't win all three of our remaining games because we're a good side and we know that on our day we can beat anyone," he told the club's website.

"There's also no question of which we would rather have in terms of the FA Cup and Premier League survival because we want both. We feel that we can do the name of this club justice and win the FA Cup on Saturday."

Wigan are guaranteed a spot in the Europa League next season as City will be in the Champions League but are more than likely to make their European bow in the second tier unless Martinez can perform another great escape.

They are three points behind Newcastle United, Norwich City and Sunderland, all of whom also have two games left.

While the FA Cup final would appear to be a distraction, especially with Arsenal looming next week, McArthur says they will feed off the buzz of the Wembley showpiece.

"We're able to concentrate on the FA Cup and Premier League separately and if anything, the cup has been a positive to our Premier League form because it has built up winning rhythms which will hopefully happen again," he said.

"We've got three massive games now and we're looking forward to all of them, but first we've got to address the highest profile game in Wigan Athletic history.

"Our target right now is to win the FA Cup then on Sunday after the game we'll start to focus 100 percent on staying in the Premier League."