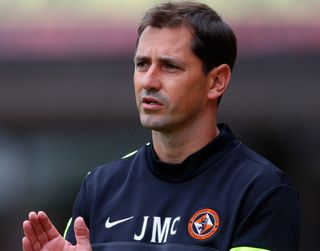 Mackay-Steven, 22, stood out for the Scottish Premiership club last term, scoring five goals in 23 appearances - form that saw him rewarded with a call-up to the Scotland squad.

Championship clubs Leeds United and Blackburn Rovers are said to be chasing the youngster, who has two years remaining on his contract at Tannadice Park.

And McNamara has welcomed the transfer talk, insisting it was a sign of the player doing the right things.

Of the rumours, McNamara said on Thursday: "It's part and parcel (given the) player's ability.

"Johnny Russell (who moved to Derby County from Dundee United for an undisclosed fee) left there going into his last year (of his contract), which we had to do.

"We couldn't afford not to. That's the nature of the business. The club has a selling point if players aren't going to sign new contracts.

"Fortunately Gary has two years to go so it puts us in a stronger position.

"Speculation means he is doing things properly and doing well, so long may it continue."