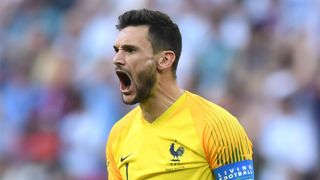 France defender Benjamin Pavard hailed Hugo Lloris' performance in Les Bleus' 2-0 World Cup victory over Uruguay and insists the goalkeeper has the full backing of his team-mates despite media criticism.

Lloris arrived at the World Cup a man under scrutiny following errors in France's warm-up matches and a number of poor performances for Tottenham across the course of the 2017-18 season.

He has since kept two clean sheets from four matches in Russia, including one in France's 2-0 quarter-final victory over Uruguay in which he pulled off one particularly outstanding save from a Martin Caceres header, diving low to his right for a one-handed reaction stop.

And Pavard says the captain has led by example, telling reporters: "He is really an exceptional goalkeeper. He has had a great career, he's our captain.

"He is a leader, on and off the field. He gave an outstanding performance [against Uruguay]."

Lloris will go head-to-head with his rival at club level, Chelsea's Thibaut Courtois, when France take on Belgium in Tuesday's semi-final.

The match will be Lloris' 103rd appearance for France and Pavard has no doubts about the man playing behind him.

"We never had doubts about him - you [media] doubted him," said the full-back.

"We, we trust him. He proves to everyone that he is a great goalkeeper."