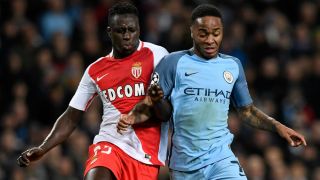 Manchester City full-back Benjamin Mendy has revealed that he used last season's Champions League game at the Etihad Stadium as an audition for a move to the club.

Mendy was part of the Monaco side that ultimately dumped City out of the competition in the round of 16, despite slipping to a 5-3 defeat in the first leg in Manchester.

Despite forming part of a defence that leaked six goals over two legs, Mendy did enough to convince Pep Guardiola to spend more than £50million to bring him to Manchester in July.

The 23-year-old will make his first appearance at the Etihad as a City player against Liverpool on Saturday, and admits he can't wait to perform in front of the home fans.

Mendy told the club's official website: "I already wanted to join this club, to join Pep Guardiola here, so when I saw the draw I started to motivate my team-mates.

"City is a club that I liked a lot. When I saw the draw, I thought it was the perfect opportunity. After, when I arrived here for the first leg, I saw the Etihad Stadium and it is magnificent.

"I knew I had to give my best and show what I could do in order to have a chance of coming here and becoming a City player."

Mendy made his debut in the 2-1 win against Bournemouth two weeks ago, and knows he is going to have to be at his best to combat a rampant Liverpool attack.

"I came to the Premier League to play in matches of this calibre. Above all at home, it will be great to play in front of our own fans.

"They were fantastic at Bournemouth and we celebrated a bit together at the end and now I want to give them my best the whole season."