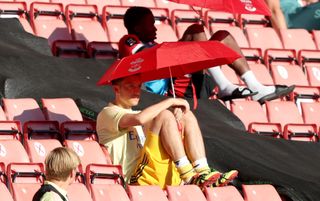 Mesut Ozil has expressed his disappointment at Arsenal’s reaction when he called out the alleged mistreatment of Uighur Muslims in China and insisted only he will decide his future with a year left to run on his current deal.

In December, the former Germany international posted on social media about the Uighur population and called them “warriors who resist persecution”.

Arsenal did not criticise Ozil for making the comments, instead posting on their page on the Chinese social media site Weibo that the club “always adheres to the principles” of not getting involved in politics.

Since then Premier League clubs have supported the Black Lives Matter movement after George Floyd was killed in America and the Gunners playmaker, while pleased, would have liked similar support.

Ozil told The Athletic: “It doesn’t matter what religion or colour you are — Muslim, Christian, Jew, black, white or anything else. We are all the same.

“What I said was not against Chinese people, it was against whoever is doing this to the Uighur Muslims and other people who are not helping them, such as other Muslim countries.

“I have given a lot to Arsenal, on and off the pitch, so the reaction was disappointing. They said they don’t get involved in politics but this isn’t politics and they have got involved in other issues.

“In America, we saw George Floyd killed and the world spoke up to say Black Lives Matter, and that is correct. We are all equal and it’s a good thing that people fight against injustice.

“There are a lot of black players and fans of Arsenal and it’s fantastic the club is backing them, but I wish people would have done the same for the Muslims because Arsenal have many Muslim players and fans as well, and it is important for the world to say that Muslim Lives Matter.”

The 31-year-old has failed to be a regular under different managers since, but has no plans to move on this summer.

“I’ll decide when I go, not other people,” Ozil added. “Things have obviously been difficult but I love Arsenal, I love to work there, I love the people in the club — the real people, those I’ve been with for a long time — and I love London, it’s my home.

“Whatever happened in the last two seasons, I’m happy and very strong mentally. I never give up on anything. I want to help my team and I’ll fight for it. If I’m fit, I know what I can do on the pitch.”

New Gunners head coach Mikel Arteta failed to give Ozil any playing time after lockdown ended with his last appearance on March 7 against West Ham.

While the league was suspended, Arsenal’s first-team squad, Arteta and key coaching staff agreed a 12.5 per cent pay cut to help the club deal with the fallout of the coronavirus crisis.

Four months after that decision in April, it was announced last week that 55 staff at the club would be made redundant.

“I’m not afraid to stand up for what I feel is right — and when you see what has happened now with the jobs, maybe I was,” Ozil said.

“As players, we all wanted to contribute. But we needed more information and many questions were unanswered. Everyone was fine with a deferral while there was so much uncertainty — I would have been OK to take a bigger share — and then a cut if required, once the football and financial outlook was clearer.

“But we were rushed into it without proper consultation. For anyone in this situation, you have a right to know everything.

Arsenal declined to comment when approached by the PA news agency.