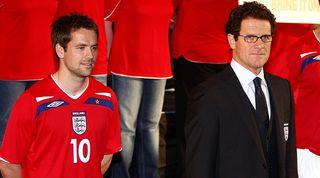 The Italian took over as Three Lions boss in January 2008, when Owen was plying his trade for Newcastle.

The striker was previously a regular for the national team but was handed just a single appearance during Capello's time in charge.

And Owen has hit out at the former Milan, Roma and Real Madrid boss for his strict approach and poor language skills.

"When he assembled his first squad session, the first thing we noticed was that he was very strict when it came to food and the second thing was that he couldn't speak a word of English," Owen wrote in his new book Reboot - My Life, My Time, as quoted by the Daily Mirror.

"Everyone was just staring at each other. I was thinking, 'How is this guy going to tell us anything?' Looking back now, I have no idea what made the FA appoint somebody who couldn't speak the English language. It defies belief.

"I was on the bench for his first two squads having started for England for several years. This set the alarm bells ringing. With 10 or 15 minutes left in a game we lost 1-0, he sent me on. My abiding memory of that night was my appearance in front of the line of press afterwards.

"By this time, Fabio's reluctance to start me was a bit of a hot story. The press were all over it - asking me if he'd explained his decision and, if so, what had he said.

"Obviously, you don't need to be a genius to work out that the headlines were pretty damning towards a manager who'd only been in the job for two games. And it's probably no coincidence that Capello never picked me again.

“Not only did he cut short a hard-earned international career with absolutely no explanation whatsoever, but he also went on to be one of the least effective England managers ever.

"He was absolutely crap. In my opinion, Fabio Capello caused catastrophic damage to both my career and English football in general and got paid handsomely to do so."

Owen is England's fifth-highest scorer of all time after netting 40 goals in 89 games for his country.