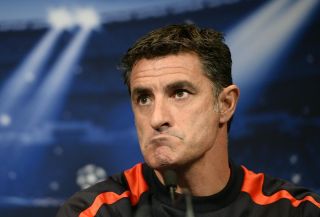 Michel's side approach their final Group C encounter against Anderlecht on Tuesday knowing that a win will see them reach the knockout stage for the first time since the 2009-10 season.

The Greek outfit will also qualify if they draw and Benfica fail to beat PSG, but Michel is keen to ensure Olympiacos go through in style.

"We want to win because our campaign has shown that we deserve to go through," Michel said. "In order to do that, we have to win this match.

"Our players have worked really hard and tried a lot. They are experienced enough to understand the importance of this fixture.

"If we had any doubt, a simple walk in the streets would be enough. The fans will not allow us to forget how important it is and how strongly we need to win."

Former Sevilla boss Michel believes Olympiacos are in an ideal situation, and is confident his players can handle the pressure of the occasion.

"Recall the day of the group-stage draw; if someone was to promise us that we would play the decisive qualifying match at home, and hold our future in our own hands, I think we would all have wanted that," he added.

"I don’t think that our mental state and side’s character allow something like that (pressure) to affect us.

"What we must wholeheartedly do is to do things right as we should; otherwise, it will cost us dearly."