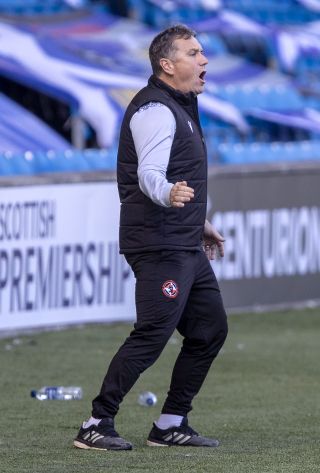 The Tangerines were squashed by Kilmarnock before the international break as they slumped 4-0 in East Ayrshire.

But Mellon does not believe there are major problems with his team and has backed them to produce a better display against Rangers at Ibrox on Saturday.

Steven Gerrard’s team became the first Scottish side to open a top-flight campaign with six clean sheets since 1906 with their victory over Hamilton last month.

But the Tannadice boss has thrown down the gauntlet in front of his team after tasking them with becoming the team who finally find a way through the Light Blues defence.

He said: “It’s a great opportunity for us to go down to Glasgow and see where we’re at as a team.

“The Old Firm are the ultimate test in Scotland, so we’ll treat Rangers the same way we treated Celtic earlier this season.

“They haven’t conceded a league goal yet and that’s a massive challenge for us – but one we’re looking forward to taking on.

“We’ll be positive and go all-out to try to become the first team to score against Rangers.

“I need to be careful with what I say because we lost four goals at Kilmarnock.

“But my job is to look at the performance and ask why. When I went over the game and spoke to the players about it, I could see we just need to get better at certain moments.

“There is a lot of stuff we’re doing well and stuff we want to do better. It’s all about just continually moving forward.

“We know it’s a big occasion, but this isn’t a day out. I firmly believe that Dundee United should always aim to be competitive in every game. That’s the status of this club and the place it holds in Scottish football.”