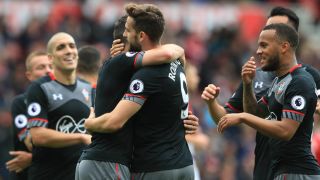 Jay Rodriguez scored one and assisted another as Southampton won 2-1 at relegated Middlesbrough to record their first victory in six games and move up to ninth in the Premier League.

Forward Rodriguez had not netted since January, but struck late in the first half to give Saints the early advantage.

And he set up half-time substitute Nathan Redmond to strike after the break, shortly before Shane Long struck the crossbar with a penalty.

Boro, playing their first match since their top-flight relegation was confirmed by defeat to Chelsea on Monday, got one back when Patrick Bamford headed in with 18 minutes remaining, the striker's first goal in over two years.

But there was no way back for the hosts - who have now won just once in 20 league games - as Saints boss Claude Puel was rewarded for making eight changes to his starting line-up.

Middlesbrough made one change to their line-up and it was the player they brought in, Bamford, who threatened first when his shot was impressively blocked by Martin Caceres.

Caceres, who was making his first Southampton start along with Jeremy Pied, then headed off target from Sofiane Boufal's corner at the other end.

Referee Anthony Taylor awarded Boro a controversial free-kick, making the award even though he had previous played advantage in allowing Bamford to shoot at Fraser Forster, but Alvaro Negredo wasted the set-piece opportunity, shooting straight into the wall from 25 yards.

A quiet first half did produce a goal, though, with Rodriguez striking three minutes before the break.

Jordy Clasie's pass down the right channel released Long and he clipped in a cross towards the penalty spot, allowing Rodriguez to sweep in a low first-time finish past Brad Guzan.

The home side initially made a solid start after the break, Adam Forshaw firing wide with a deflected effort and Bamford slicing over after Negredo's flick-on.

But Saints doubled their advantage after 57 minutes, Redmond – who had replaced Boufal at the break - collecting Rodriguez's pass and cutting inside Fabio da Silva before unleashing a fine finish into the top corner, the winger's seventh league goal of the season.

Boro made a double substitution in response, Grant Leadbitter and Viktor Fischer coming on, with Agnew's men getting a reprieve soon after as Long missed his spot-kick having been taken out himself by Guzan after being sent through on goal by Ryan Bertrand.

And the hosts got a goal back when Bamford got up inside the six-yard box to head in Fischer's corner and score his first Premier League goal, with Forster rooted to his spot.

Middlesbrough, though, only had one opportunity for an equaliser when Calum Chambers' late drive was kept out by Forster and Saints' win was made all the sweeter as Charlie Austin came off the substitutes' bench to make his first appearance since December after injury.