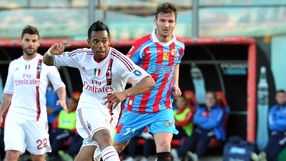 The club's chief executive Adriano Galliano has written to the Italian FA asking for the system to be used at least until football's ruling body FIFA decides whether or not to accept goalline technology.

"Everyone makes mistakes," said Galliani in the letter published on the club's website. "But some are very difficult to accept, no matter how much reason and comprehension we try to find.

"I realise technological solutions, which have been proposed by many parties, could still encounter obstacles and not be accepted. But I think there is no reason why we can't adopt the system used already in the Champions League."

Leaders Milan were denied a clear goal against title rivals Juventus when officials failed to spot Sulley Muntari's header had crossed the line.

Milan were leading 1-0 at the time but eventually drew 1-1.

On Saturday, there was another less clearcut case involving a Robinho shot which was cleared off the line by a Catania defender.

Had the goal been awarded it would have put Milan 2-1 ahead with less than 20 minutes to play. Instead they drew 1-1, leaving them two points ahead of Juventus.

European football's ruling body UEFA began using an extra linesman behind each goal in the 2009/10 Europa League. The system has also been extended to the Champions League and will be used at Euro 2012 in June.

The International Football Association Board (IFAB), the sport's rule-making body, has approved goal-line technology in principle and two systems are now being tested.