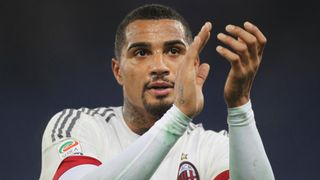 Kevin-Prince Boateng has urged his AC Milan team-mates to step up their game as they attempt to kick-start a sluggish start to 2016 against Carpi in the Coppa Italia on Wednesday.

The Rossoneri suffered a shock 1-0 defeat at home to lowly Bologna in their first match of the calendar year before Sinisa Mihajlovic's men drew 1-1 at Roma on Saturday.

Subsequently, Milan remain eighth in Serie A and some 10 points adrift of rivals Inter who occupy the final Champions League spot in third.

The Coppa remains wide open, though, with the winner of Wednesday's quarter-final contest at San Siro going on to meet either Spezia or Alessandria in the final four.

And Boateng, who completed his return to Milan on a free transfer this month, is keen for the team not to waste their opportunity.

"We have to battle and turn our attention towards Wednesday’s massive cup tie," Boateng told Milan Channel.

"We can improve with each day. I can also get better and grow because I am still not yet 100 per cent. I want to get there, work hard and carve out a place for myself in this team and win.

"We have to beat Carpi in the cup. We all want to progress."

Milan, who won the last of their five Coppa Italia titles in 2003, are likely to remain without Mario Balotelli (groin injury), Alex (knee) and Jeremy Menez (back), although the latter resumed squad training earlier this week and is on his way back after a lengthy spell on the sidelines.

Carpi may be struggling in the relegation zone in Italy's top flight, but Mihajlovic - who is reportedly under pressure at San Siro due to Milan's inconsistent form - will be under no illusion as to the difficultly Milan face having seen his team held to a goalless draw when the side's met in Serie A last month.

Fabrizio Castori's men might be battling against relegation, but their recent form gives cause for optimism.

They opened 2016 with a surprising scoreless draw away at Lazio, before seeing off Udinese 2-1 at the weekend.

Carpi have little history in the Coppa Italia, but they showed in the round of 16 that they are a force to be reckoned with in a surprise 1-0 win over Fiorentina at the Artemio Franchi, having previously seen off Vicenza and Livorno.

Wednesday's match will be a special encounter for striker Marco Borriello if he features.  The 33-year-old - who missed Carpi's first two matches of 2016 - came through the ranks of the Milan youth academy and enjoyed two spells with the Rossoneri.