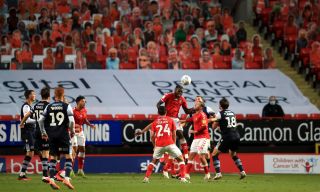 Rowett believes Millwall’s win at the top of the weekend’s action will only serve to heap pressure on their promotion-chasing rivals.

“Listen we’re two points off it as we stand, so we’re right back in it,” said Rowett, of the play-off picture.

“Ultimately it’s up to the teams tomorrow, mainly Cardiff at the moment in that hotspot.

“But we’ve got to make sure we keep getting results to put the pressure on.

“As much as you don’t want to lose the local derby you want to go and try to win it.

😍 A striker's finish from the big defender! After @_ConnorMahoney's effort is stopped by Phillips, Jake Cooper pounces on the rebound and fires into the roof of the net – #Millwall have the lead! https://t.co/ntxzzwhFc6— Millwall FC (@MillwallFC) July 3, 2020

“One of our left centre-halves ends up in the box for a finish in open play.

“I think that ambition just about deserved us to win the game.

“We’re still in it and we’ll keenly watch what happens tomorrow without any pressure.”

Millwall extended their stunning run of not falling to defeat by Charlton since 1996.

And Rowett revealed extra relish at continuing that derby dominance in a minor disagreement with Millwall’s Friday night hosts.

“Charlton refused to let us put our flag in the away end,” said Rowett.

“They wouldn’t let us do it, but someone had a Millwall flag in a tower block behind the ground, so the lads just wanted to show their appreciation for that at full-time.

“We wanted to put our flag out, but we weren’t allowed to do it.

“If you can’t have your fans there you’ve just got to do the right thing.

“Charlton said we couldn’t do it, so that’s why the lads did that. But no big thing.”

Asked about Millwall’s long unbeaten run against the Addicks, Rowett continued: “I was aware of the record, as Millwall manager plenty of people mention it to you.

“What we had to do tonight, respect our fans watching at home to try to get a result for them, to raise their spirits.

“The last three games we haven’t had the points we’ve wanted.

“That was first and foremost our hopes and desires to try to get the three points.”

Charlton boss Lee Bowyer lamented his side’s continued lacklustre finishing on a night where he felt the hosts could easily have claimed victory.

“It was harsh we didn’t get anything from the game,” said Bowyer.

“It was quite an even game but we edged it second-half.

“So it’s disappointing not to come away without three points, let alone one.

“We got into some very good areas. I didn’t feel like they were hurting us our troubling our goalkeeper at all. We were the ones getting the chances and missing them.

“It’s a tough one to take. A bit like when we played them at their place.

“How have we not scored in open play in these four games? We’ve created 15 chances in all those games and can’t take one.

“We work hard on it every day and today, Macauley was one-on-one.

“You can’t miss those chances. This is what happens in this division, you get punished. It hurts.”