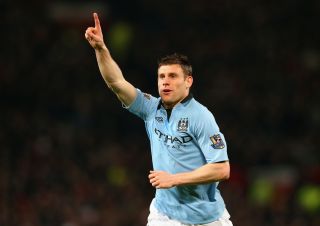 City sit fifth in the Premier League table after four wins from their opening seven matches, with their campaign highlighted by excellent 4-1 and 4-0 triumphs over Manchester United and Newcastle United respectively.

But Pellegrini's side have also slipped to disappointing defeats at Cardiff City and Aston Villa, meaning they are three points behind table-topping Arsenal.

England international Milner, who has made nine appearances at club level in competitions this season, is expecting City to become more reliable over the coming months.

The former Leeds United and Aston Villa man said: "The performances against Newcastle and Manchester United are the stand-out ones and it goes without saying we have to make sure we try and play that well every time we go out.

"We are still adjusting to a number of things. There's a higher tempo at training under Manuel and we do a lot more small-sided games than we used to so it's very different.

"Every manager has their own style and way of working but I'm enjoying it. It's intense but hopefully the fruits of all the hard work we're putting in will show out on the pitch.

"The one thing you can guarantee is that we will create a lot of chances and as we get a better understanding of how each other plays, I think we'll get better and better as a team.

"We have so much talent going forward and I don't think we'll be far away as the season progresses."

City will visit West Ham in their next Premier League fixture a week on Saturday.