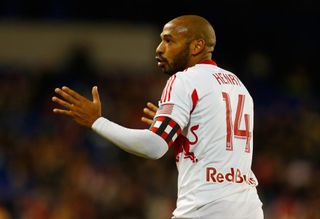 Veteran Henry, who is yet to commit to playing beyond the 2014 MLS season, beat two Sporting KC defenders and fired the ball into the top corner from the edge of the penalty area in the 52nd minute at Red Bull Arena.

The 37-year-old Frenchman's sensational strike - his third in as many games - came after MLS leading scorer and team-mate Bradley Wright-Phillips opened the scoring with an 11th-minute penalty for his 21st goal of the season.

Sporting KC pulled a goal back in the 54th minute after Dominic Dwyer headed home his 18th goal of the season but the Red Bulls held on for victory as the visiting 2013 champions slumped to a fourth consecutive loss.

The Red Bulls have collected 34 points from 26 games and now occupy the fifth and final play-off spot in the Eastern Conference.

Despite their poor form, Sporting KC remain second in the East with 42 points after 28 rounds.

Sporting KC are five points adrift of leaders DC United, who were held to a goalless draw by the Vancouver Whitecaps.

Philadelphia Union, who have a game in hand, closed to within six points of Sporting KC after accounting for an out-of-sorts Toronto outfit 2-0 at BMO Field.

The Union leapfrogged Toronto into the play-off spots thanks to goals from Conor Casey and Andrew Wenger as the Canadian franchise suffered back-to-back defeats to Philadelphia following Wednesday's 1-0 loss.

Toronto have lost their past three games and are without a win in five after slipping to seventh in the table.

In other results, Englishman Giles Barnes scored twice as Houston Dynamo came from behind to beat lowly Montreal Impact 3-2.

Barnes put Dynamo ahead in the 30th minute, only for the East cellar-dwellers to hit the front thanks to Dilly Duka and Ignacio Piatti.

But two goals in the space of three minutes just past the hour-mark from Barnes and Ricardo Clark inspired Houston to victory at BBVA Compass Stadium.

Meanwhile, Real Salt Lake consolidated third position in the Western Conference with a 2-1 win at home to fourth-placed Dallas.