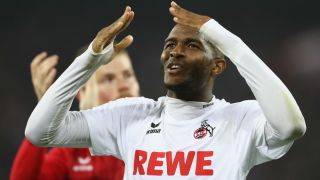 Anthony Modeste would be interested in joining Borussia Dortmund to replace Pierre-Emerick Aubameyang, according to the striker's agent.

Aubameyang is reportedly close to finalising a transfer to Arsenal for a fee of €63million, which would be a club record for Arsene Wenger's side.

Dortmund are said to be keen to bring in a replacement before sanctioning the Gabon international's departure and have been linked with a €30m bid for Modeste, who only joined Tianjin Quanjian from Cologne on a two-year loan deal in July 2017.

The 29-year-old's agent, Patrick Mendy, suggested he would be happy to link up with former Cologne boss Peter Stoger at Signal Iduna Park.

"Dortmund are a big club and naturally they're interesting for Tony," Mendy told Sport Bild.

"It is no secret he feels comfortable in Germany and in the Bundesliga. We will listen to everything and then we'll see what happens until Wednesday [when the transfer window closes]."

He has netted seven times in eight appearances in the Chinese Super League.