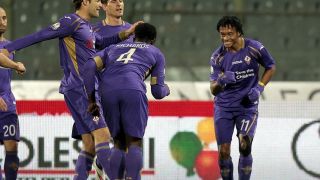 The Colombia winger has been linked with a move to the Premier League title-chasers in the January transfer window, with reports suggesting a fee in the region of £27 million (€35m) would be needed to take him to Stamford Bridge.

The Tuscan club only purchased full ownership of the 26-year-old from Udinese last year, and he is reportedly under contract until 2019.

Cuadrado underlined his value to Fiorentina with a penalty in the 3-1 Coppa Italia victory over Atalanta on Wednesday, sending his side into the quarter-finals in a game that also saw Mario Gomez score twice to break his goal drought.

After the match, Montella made his stance on Cuadrado's future clear.

"To date, there is no chance that Cuadrado leaves Fiorentina," Montella told reporters, as quoted by Gazzetta dello Sport.

"He knows that some things are exaggerated."