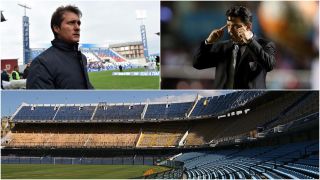 A match between Boca Juniors and River Plate is never short of meaning and when the rivalry between Argentina's two biggest clubs resumes with a Superclasico at the iconic Bombonera on Sunday, the title is potentially at stake.

Boca have been the dominating force in the monstrous 30-team Primera Division that is late Argentine Football Association president Julio Grondona's legacy this season, with River seven points adrift in fifth – a position that would see them fail to qualify for the 2018 Copa Libertadores.

Marcelo Gallardo's side possess a game in hand and victory will reinvigorate the title race, but defeat in the cacophonous Bombonera this weekend is not an option.

A domestic league title is the only thing evading Gallardo, a highly regarded coach who has been linked as a possible replacement should Diego Simeone opt to leave Atletico Madrid. The 41-year-old led River to Copa Sudamericana and Copa Libertadores glory before adding the Copa Argentina in 2016, but the club have not been crowned domestic champions since 2014.

That victory masterminded by Ramon Diaz remains their only triumph since returning to the top flight after the shock of a first relegation in their history in 2010-11 and there can be little doubt a reminder of that will be offered by Boca fans.

During a Libertadores clash at La Bombonera in May 2015, River players were attacked with pepper spray by a Boca supporter as they emerged for the second half. While a decision was made on whether the game would continue in the aftermath of the shocking scenes, a drone kitted out as a ghost bearing a B on its chest flew over the pitch – a haunting reference to their year spent in the second tier.

However, this time around, Boca boss Guillermo Barros Schelotto is keen for Boca to do their talking on the pitch.

"I would not forgive the lack of spirit to go out and win the match that has made Boca great," he told a pre-match news conference. "We are going to go out to win, just like in the 23 other matches we have played.

"La Bombonera is going to make this game. It's great as a coach and even better as a player. More than anything we are thinking of winning for the fans, for the shirt, because it's a derby. It's important."

Key to Boca's hopes will be striker Dario 'Pipa' Benedetto. The 26-year-old is a clinical finisher who has amassed 14 league goals, a tally no other player can better, in his debut season at the club since signing from Club America last June.

The return of influential forward Ricardo Centurion from almost a month out through injury in last weekend's 0-0 draw against Estudiantes provides a timely boost, though it means Gonzalo Maroni – the 18-year-old who wowed La Bombonera in just his second senior appearance with a mesmerising display in a 3-0 win over Arsenal de Sarandi – will likely start his first Superclasico on the bench.

Centurion was on target as Boca produced a stunning comeback to win 4-2 at El Monumental back in December, but this time, of course, they are without Carlos Tevez.

River's attack remains just as potent with Sebastian Driussi enjoying a fine campaign. A product of River's continually brilliant youth academy, the exciting 21-year-old is the only player to match Benedetto's top-flight tally this term.

Driussi was a second-half substitute as Gallardo made eight changes for the 1-1 Libertadores draw against Emelec at El Monumental on Wednesday – a move that had the double benefit of allowing his key players to rest and securing a place in the knockout stages.

The potential return of Nacho Fernandez from a hamstring injury could bolster their midfield options, something Leonardo Ponzio is keen for in order to stop ex-Real Madrid man Fernando Gago dictating the play.

"If we mark Gago well we will nullify Boca's game. In large part because Fernando is a great player with national team and European experience and Boca's game goes through him," Ponzio told Clarin.

Ariel Rojas' role will likely be key to bringing such aims to fruition, and Gallardo did nothing to play down the magnitude of the match and the circumstances it comes in.

"We are going to Boca's stadium to win. It will be essential to keep our title aspirations alive. We will play with the intention of reducing the gap to them," Gallardo said after the draw with Emelec.

There can be no predicting the course of always fiery Superclasicos. It is a match in which tempers always run high, as evidenced by their "friendly" meeting in January that saw three red cards in a 2-0 win for River.

With the result having huge ramifications in the race to be crowned Kings of Argentina, a tense affair is almost guaranteed. But for the sheer drama of the spectacle between these rivals, it is an occasion that cannot be missed.