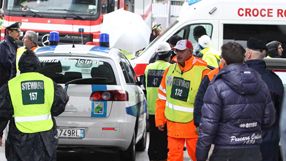 The 25-year-old Morosini, a midfielder for Livorno, collapsed after a cardiac arrest in the 31st minute at Pescara in central Italy. He never regained consciousness.

After the news of his death, Italy's football federation postponed all the weekend's professional matches. No date to play the Serie A games has been set although a midweek programme at some point in the next two months is likely.

The ambulance was delayed by three minutes outside the Pescara stadium because a city police car was parked in front of the emergency passageway. Stadium stewards were forced to break the car window, put it in neutral and push it out of the way.

Pescara mayor Luigi Albore Mascia announced an internal investigation to find out who was responsible and said the probe would be wrapped up by early Monday.

Overnight, city police in Pescara were kept off the streets and replaced by federal police units because they were afraid the would be targeted by angry fans, municipal police commander Carlo Maggitti said.

Pescara prosecutor Valentina D'Agostino is also investigating to see if the delay may have cost Morosini his life. Doctors who were on the scene suggested that three minutes time probably would not have changed the tragic outcome.

"Everything that could be done was done," Ernesto Sabatini, one of the doctors who treated Morosini, told Ansa news agency.

"I was one of the first on the pitch and when I got to him he was already stiff."

Doctors said that Morosini's heart had stopped when he was on the field but an official autopsy is to be carried out on Monday to determine cause of death.

Piero Gnudi, Italy's minister for sport and tourism, told state television late on Saturday that he would see whether sophisticated medical equipment, including defibrillators, should be readily available at all professional sporting events.

Hundreds of Livorno fans visited the stadium on Sunday and left flowers and team scarves under a banner that read: "You fought right up until the end, goodbye great Moro." Many said Livorno should retire his number 25 jersey.

Morosini's girlfriend arrived in Pescara on Saturday to identify the body for legal purposes.

"He was smiling slightly. He was beautiful," she told her friends afterwards before breaking into tears, Ansa reported.

Morosini had himself known tragedy. He lost both his mother and father when he was a teenager and a brother committed suicide, newspapers reported.

Morosini had also played for Udinese among other Italian club sides and Italy's international under-21 team.