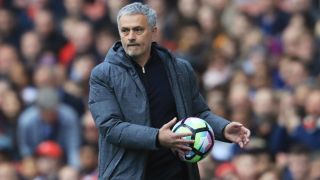 Jose Mourinho has conceded that Manchester United's top four hopes are effectively over after losing 2-0 to Arsenal, with the Portuguese manager now going all out to win the Europa League.

United have struggled to break into the Champions League qualification places all season, spending most of the campaign in fifth or sixth spot in the Premier League, and Sunday's loss leaves them in a difficult position.

Fourth-placed Manchester City are four points ahead with three matches to go, while Arsenal are now just two points behind in sixth and have a game in hand on the Red Devils.

Granit Xhaka and Danny Welbeck did the damage in north London on Sunday and Mourinho has accepted United's hopes of a return to UEFA's elite competition via a league position are over.

Instead, following Thursday's 1-0 Europa League semi-final first-leg win over Celta Vigo in Spain, their attention is focused on winning Europe's second-tier tournament, with the associated prize of Champions League qualification.

Mourinho told Sky Sports: "Yeah, all [focus] on the Europa League but today we tried to play for a result.

"You can tell me you didn't play with the best team, the players who are first choice at the moment, but you cannot say we didn't try to win the game.

"That is what we're going to try to do in the remaining three matches in the Premier League but, obviously, everything for next Thursday."

FT: Arsenal 2 0.A disappointing afternoon for us at the Emirates as goals from Xhaka and Welbeck settle the game. May 7, 2017

Despite the defeat, Mourinho was eager to praise his team's performance and could find no fault with the likes of Phil Jones, Chris Smalling and Juan Mata, who were all making their first starts following extended spells on the sidelines.

"I liked very, very much individual performances and I liked [them] collectively," Mourinho said.

"We lost because we didn't score and we had great chances to. They had the luck of [the first] goal.

"Apart from that, I cannot ask more from players who do not play one minute of football in the past seven weeks like Smalling and Mata. They were amazing the way they performed.

"The kid [Axel Tuanzebe], the same. I think he did an amazing job and I think Alexis [Sanchez] knows his name because the kid really played very well.

"So, difficult to manage it but I think, in principle, the team was good, was organised, played to win and defended well.

"Arsenal were not better than us in my opinion but congratulations."

The result marked Mourinho's first Premier League defeat to Arsene Wenger, a manager whom he has often had very public spats with.

And unsurprisingly the former Chelsea tactician could not resist getting in one more jibe at Arsenal and Wenger.

He continued: "They scored, [earned] the win and finally I leave this stadium with [the] Arsenal fans happy.

"It is the first time I saw them [the Arsenal fans] smile, I saw them enjoy [it] and they deserve [it] because they are an amazing club and amazing fans [who] also deserve some joy."