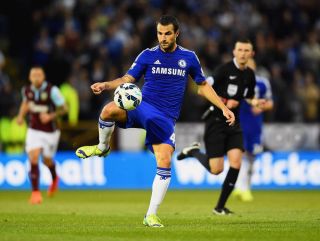 Fabregas enjoyed a sparkling debut as Chelsea began their quest for the Premier League title in fine fashion, the Spain midfielder laying on assists for Andre Schurrle and Branislav Ivanovic after fellow new boy Diego Costa had cancelled out Scott Arfield's stunning early opener for Burnley.

Mourinho's men needed just seven minutes to turn the game around after Arfield had given newly promoted Burnley hope of pulling off a famous victory, and the Portuguese earmarked Fabregas' performance as the key to an impressive triumph.

He told Sky Sports: "When you come to a place like here and you are a goal down against a difficult team and in a difficult place then players can get downhearted and lose faith.

"Burnley are a direct and physical side but overall we had good control and we showed moments of class.

Meanwhile, former Arsenal captain Fabregas was quick to praise his team-mates for making him feel at home since his switch from Barcelona, and is hopeful of a successful first season back in the Premier League.

"You always want to do well and I love playing football," Fabregas said.

"We have a young talented team and so far so good. They made it easy for me by making me welcome from day one.

"I'm expecting a good year in front of us. This [signing for Chelsea] is not something I would have expected. But football is unexpected. It has brought me here and I want to be as good as I can be."