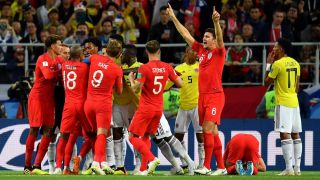 England progressed from the last-16 clash at the World Cup, winning 4-3 on penalties after the 1-1 draw in Moscow Tuesday.

But there were eight yellow cards shown during a tempestuous encounter and it was the approach of Gareth Southgate's men that surprised Mourinho.

The Portuguese tactician singled out Maguire, accusing the Leicester City defender of diving to try to win a penalty.

"The negative thing for me was the fact… I think there is exaggeration on theatre by the players," he told Russia Today.

"I was surprised to see central defenders like Harry Maguire, normally he is a very honest guy, diving in the attacking box asking the referee for VAR.

"The game loses quality… and for me that was the negative point."

Colombia received six of the eight yellow cards for the game, including one for Wilmar Barrios for an apparent headbutt on Jordan Henderson.