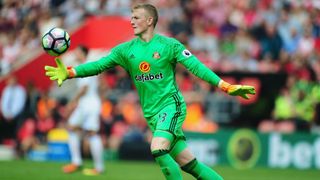 Jordan Pickford will keep his place in goal for Sunderland when they face Everton in the Premier League on Monday, manager David Moyes has confirmed.

Pickford shone in a 1-1 draw with Southampton ahead of the international break, only to let a tame Jay Rodriguez shot squirm through his hands in the last few minutes to cost his side two points.

Moyes completed the signing of goalkeeper Mika from Boavista to add to his goalkeeping options, with Vito Mannone out of action due to an elbow injury, but the Sunderland manager has faith in Pickford.

"Pickford has the jersey," Moyes told reporters on Friday.

"He played really well against Southampton and he needs to play well to keep his place."

Mika is likely to be joined by fellow new arrival Victor Anichebe on the bench, with the former Everton striker not fit enough to start, while Jan Kirchhoff is available for selection.

"Victor Anichibe isn't fit yet and I won't rush him back," said Moyes. "I want him to be in peak condition.

"The injury situation is improving. Lee Cattermole has returned to training and Kirchhoff returned on Tuesday at Rochdale."

Moyes is looking forward to facing the club he managed between 2002 and 2013 and the Scot recalled some of his best memories of life at Goodison Park.

"It is a special game against Everton," said Moyes. "I had ups and I had downs but most of all I worked with some great people.

"I got lost on my way in on my first day at Everton. I was nervous but we scored after 28 seconds the next day, it was a good start.

"Our first trip in Europe was fantastic. I also remember when Wayne Rooney scored the goal against Arsenal. Goosebumps."