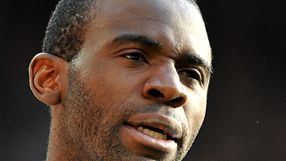 A joint statement issued on Friday by Bolton, Bart's Hospital and the NHS (National Health Service) Trust was encouraging about Muamba's recovery following the incident at White Hart Lane on March 17 when his heart stopped beating on its own for 78 minutes.

"Fabrice Muamba continues to make strong and steady improvements and remains in the intensive care unit of the London Chest Hospital," the statement said.

On Thursday, Bolton manager Owen Coyle said Muamba had been allowed out of bed and had walked down a corridor in the hospital.

He's taking steps, talking and has that big smile we love to see. He is progressing the right way," said Coyle.

Muamba's family posted a picture of him on Twitter taken is his hospital room last week and he has received thousands of get-well messages from players, officials and supporters.