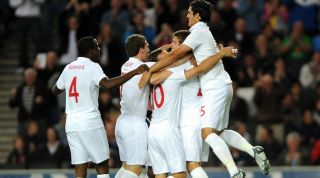 Truly magnificent. Between James Milner making his first and last appearance for England’s Under-21 team, he played for Leeds United in 2003/04, signed for Newcastle United after Leeds were relegated, joined Aston Villa on a season-long loan deal, went back to Newcastle for another two years including signing a new four-year contract, was sold to Aston Villa before playing a full season there and was called up to the senior England squad.

Want more evidence of just how long Milner’s Under-21 career span was? In his first appearance, Milner played with Nigel Reo-Coker and Jon Stead. In his last, he played against Mesut Ozil and and Mats Hummels. Cripes.

The latest in fairly long line of holding midfielders that everyone within the England setup desperately wants to stay fit and be brilliant to solve our issue but who just never quite makes it. Gareth Southgate is so fond of Chalobah that he played him in England’s 3-2 win away in Spain in October 2018, despite him having played only four minutes of Premier League football so far that season. By May, he had only reached 266.

A winger whose potential has never been in doubt, but who has now reached the age of 25 and just needs to jump up to the next level. For so long, Redmond’s youth made him a tantalising prospect. Now there are ten players in England’s current senior squad who are younger than him.

At the age of 25, Redmond played under 12 different managers, each with a different strategy on how to use wingers. That’s not easy.

Now back at Derby County to bookend his career, Huddlestone had high hopes of superstardom. Having broken into Derby’s team during their dismal 2003/04 season when they ended 20th in the Championship, George Burley described him as “the best passer of the ball I have ever seen”.

It seems like some sort of time warp that Huddlestone was a Tottenham player for eight years, but he only once started more than 18 games in a Premier League season before leaving for Hull. If the talent might have warranted more than his four England caps, regular club football only arrived at the age of 27. Huddlestone has also only ever scored 26 senior career goals. But at least they were all hit beautifully from 25 yards.

A miracle that he’s still with us, for which he and we must be grateful, but a bloody shame that we never got to see him reach his potential. Muamba was just 23 when he collapsed on the pitch during the FA Cup quarter-final between Bolton and Tottenham. Muamba’s heart had stopped for 78 minutes, but somehow recovered for him to be discharged from hospital a month later.

Muamba had received the last of his 33 Under-21 caps as England were eliminated from the European Championships by Czech Republic. Alongside him in that starting XI were eight players who would go on to appear for the senior team: Ryan Bertrand, Kyle Walker, Chris Smalling, Phil Jones, Jordan Henderson, Tom Cleverley, Daniel Sturridge and Danny Welbeck.

It feels like Ward-Prowse was 19 for a few years and then one morning suddenly turned 24 and became ineligible for the Under-21 side. The recent call-ups to the senior team are promising, but the relative lack of competitive minutes (eight, vs Macedonia in a 5-1 win) is a little concerning given that a) Ward-Prowse has been in excellent form at club level and b) England’s central midfield has been ravaged this season by poor form (Eric Dier), injury (Harry Winks) and players not getting enough minutes (Fabian Delph, Ross Barkley, Ruben Loftus-Cheek).

Southampton supporters won’t appreciate the message, but it would be ruddy nice to see Tottenham make a move for Ward-Prowse this summer and turn him and Winks into a wonderful pair of central midfielding nice boys that you’d take home to meet your parents.

Ah yes, that ball-playing central defender who England’s coaching teams so wanted to be brilliant and so kept on picking despite him falling out of favour during three years of loans to Wolves from Chelsea. Even that wasn’t as surprising as Fabio Capello picking him in the senior squad to face Germany in November 2008.

Having finally found a permanent home with regular football at Nottingham Forest (but showing no signs of ever troubling the England senior squad or Premier League), Mancienne moved to the MLS before he turned 30. He’s now the highest-paid defender in the history of New England Revolution. Obviously.