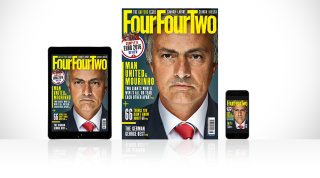 Manchester United manager, Jose Mourinho. The Special One finally has the job he's always craved. The question now: will his often cited inability to compromise make or break Manchester United?

The words inscribed on the inside of his wrist watch - “I’m not afraid of the consequences of my decisions” - are a credo that has delivered success and strife in equal measure. Time to speak to those who know him and find out which it’ll be at Old Trafford in this month’s FFT.

We also take a look back over the events of the last month in France. Dimitri Payet's exocet on the opening night, Bastian Schweinsteiger's surprisingly energetic goal celebration, Hal Robson-Kanu's Cruyff turn… relive the good, the bad and the ugly from four weeks of frolics at Euro 2016.

You’ve seen the clips of England’s triumph a thousand times, but there are plenty of other things about the 1966 World Cup that have been long forgotten. FFT learns the truth about the iconic tournament, passing on 66 things you didn’t know about '66… on page 66. Naturally.

This month's One-on-One is with Pierre van Hooijdonk, the former Nottingham Forest striker and Dutch international. He takes your questions on going on strike at Forest, not getting on with Robin van Persie and falling out with Dave Bassett… that’s one not to be missed. It gets, er, a bit ‘catty’.

Mourinho, Simeone, Pep… Big Sam: none of them could have succeeded without trailblazing pioneers. Meet the men who moulded today’s top bosses, featuring the Midlander who launched tiki-taka and the Lancastrian who inspired the Magical Magyars.

Psychology, communication and coffee. Lots of coffee. What actually happens on a UEFA coaching course? We go back to school with Kevin Phillips, Fabrice Muamba and Fredi Kanoute - The Class of 2016 - to find out.

4-4-2: back with a vengeance? The classic system was starting to become something of a tactical relic but everyone’s talking about it again (the formation, not the magazine, though hooray for us too!) thanks to Leicester City, Atletico Madrid and co. Why did it go out of fashion? And what’s brought it back? FourFourTwo investigates 4-4-2…

We also pay tribute to Gunter Netzer. He may not be a household name in the UK, but this is German football’s answer to the ‘Fifth Beatle’ George Best. FFT discovers why the blond midfielder became such an icon in this month's Action Replay.

In our Planet Football section, Nigel de Jong reveals his favourite nickname, Jesus Navas features in great goals retold with his first goal for boyhood club Athletic Bilbao and we take a look at why Inter and AC have fallen on hard times.