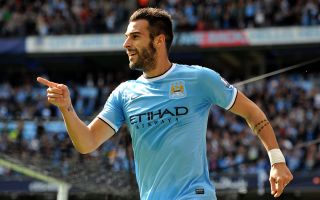 The former Almeria and Sevilla hot shot penned a four-year deal with the Blues this summer and has hit the ground running with his new employers.

Negredo has already opened his Premier League account by nodding in goals against Cardiff and Hull, but Champions League football is what he craves most.

The 28-year-old scored 69 La Liga goals for Sevilla over a four-year spell. But he was only able to play nine games in Europe’s elite competition, seven of them in the 2009/10 season, scoring one goal in a 1-1 draw against CSKA Moscow.

Speaking exclusively to FourFourTwo, Negredo said the opportunity to reacquaint himself with the top teams on the continent was a key factor in him swapping Spain for Manchester in a £20 million deal.

“The chance to play against teams like Bayern certainly influenced my decision to leave Sevilla,” he said. “Any footballer wants to grow, and in my case that meant coming to a huge club like Manchester City to compete in the Champions League against the defending champions.

"City have shown a lot of confidence in me, and I hope to repay that by performing well every game, but especially these massive games against Bayern.”

City have recent experience against the holders, having met in the group stage two seasons ago. The Blues lost 2-0 in Munich before winning by the same scoreline at the Etihad Stadium courtesy of David Silva and Yaya Toure goals.

However, the German giants are now managed by someone Negredo knows very well in the form of all-conquering former Barcelona boss Pep Guardiola.

“He makes teams play better,” said Negredo. “I know from speaking to my Spanish team-mates that it’s been a privilege for many of them to have played under him.

“He will give Bayern that extra touch of quality. They already have two very quick wingers in [Arjen] Robben and [Franck] Ribery, but he will add the control in the middle of midfield his teams always possess. I’ve played against his teams many times, so I hope to help my team-mates with the best way to combat the great quality we know they have. They’ll be two fantastic occasions.”

City have experienced disappointment in each of their past two European campaigns having been drawn in tough groups on both occasions.

The Blues failed to win any of their six games last term against domestic league champions Real Madrid, Borussia Dortmund and Ajax, and Negredo is hoping his presence will help the team avoid suffering the same fate this season.

“It’s as big as it gets in club football. The best players in the world playing for the top clubs. We know that Bayern Munich, CSKA Moscow and Viktoria Plzen are three top teams from their respective countries and it’s a matter of pride for us to be competing alongside them.

“We hope that we can enjoy a better Champions League campaign than we managed in the two seasons before I joined and strive to give the best face of our team as possible.”

Alvaro Negredo is an adidas ambassador and wears the adiZero F50 - the fastest boot in football. To buy your pair visit www.adidas.com or join the conversation @adidasUK