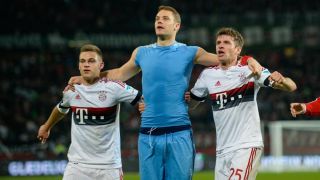 A report in Germany last week, citing leaked remarks from an unknown Bayern player, claimed the atmosphere under the Catalan is at an all-time low, though Guardiola himself rejected the rumours over the weekend.

Neuer has also moved to quash the speculation and believes the media has blown matters out of proportion.

When asked about alleged problems between the coach and players, he was quoted as telling TZ: "Not at all, everything's alright with us. We all stick together and the team is intact.

"What's going on outside has been built up a bit by the media. Everything is intact with us."

Bayern clinched a 2-0 win over Hoffenheim on Sunday to restore their eight-point gap at the top of the Bundesliga thanks to two goals from Robert Lewandowski.

Neuer was delighted with his side's attacking display but reserved special praise for Joshua Kimmich, who started at centre-back in the absence of the injured Jerome Boateng, Medhi Benatia and Javi Martinez.

"It's a bitter thing to have one or more defenders missing. We certainly hope Medhi Benatia returns," Neuer said.

"But we've also seen that other players can play in central defence. Joshua Kimmich played superbly. We just hope Holger Badstuber retains his form and is not injured.

"We had good attacks, our positional play was good. It's difficult when the opponent defends with 10 players in the penalty area.

"The play on the wings was very, very good, especially with Arjen Robben. Big compliments for the victory."