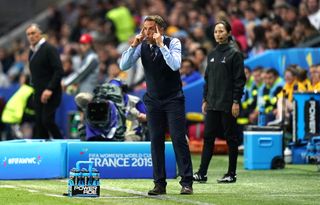 England boss Phil Neville has stressed he is looking for a win from Wednesday’s Women’s World Cup clash with Japan in Nice and will be picking his best side to get one.

The Lionesses head into their final Group D match having already qualified for the last 16 after beating Scotland 2-1 and Argentina 1-0. A draw will be enough to secure them top spot in the pool.

But the England boss has no thoughts about taking things easy.

Neville said at his pre-match press conference: “We’ve got to pick our best side because we want to finish top of the group and continue to build the momentum.

“I’ll be picking my best side to win the game tomorrow night.”

When then asked about potentially resting players given qualification had been secured, Neville said once again: “I’m going to play my best team.”

He added: “We’ve seen a massive surge in momentum from winning the two games. The confidence, the players are bouncing around the hotel, they are happy. The attention on us is positive and we want to keep that.

“The players are under no illusions about my expectations, about needing to win the game tomorrow night.

“There are two routes you can take (in the knockout rounds by finishing first or second) and there are pitfalls in both. We just want to keep winning every single game and if we do that we’ll be successful.”

England, then managed by Mark Sampson, lost 2-1 to Japan in the 2015 semi-finals, and subsequently ended up taking third place – they had never previously got beyond the last eight.

Neville was asked about that match, and Sampson having said before it “if you offered me any win against Japan, however it comes, I’d bite your arm off, and your two legs”.

And the 42-year-old said: “I think people underestimate the quality of that 2015 team. People talk about them being underdogs, and I don’t like the reference to the style of football they play.

“People referring back to 2015 as a team that didn’t play great football, played long ball and all the negatives – they actually got to a semi-final of a World Cup, and I think Mark Sampson deserves unbelievable respect, and those players.

“They didn’t just kick every ball long, they played good football. I think if I was in that 2015 team, I’d be saying actually, you try and beat what we did.

“To be honest, I’d bite your legs off to win tomorrow night.”

England full-back Lucy Bronze, a member of the 2015 and 2019 squads, who was with Neville at the press conference, said: “I think in 2015 we maybe overachieved a little bit by making the semi-final, although in that game we actually played really well and probably could have won.

“Coming into this World Cup, we have a lot more belief. We’re not here to just make the numbers up, we want to win, we want to win every game. We want to get to the final, and we want to beat any team that is in front of us, and we know that we can.”

VAR is making its debut at the Women’s World Cup and was in the spotlight on Monday as France beat Nigeria 1-0 thanks to a retaken Wendie Renard penalty.

Renard hit the post originally but it was ruled via VAR that Nigeria goalkeeper Chiamaka Nnadozie stepped off her line early.

Regarding that decision, Neville said: “We’ve had two referees give us a demonstration and lectures on it. Last night wasn’t a grey area for anyone who has had those meetings. We weren’t surprised.

“That is the rule. It’s like our penalty against Scotland (awarded for a handball after a VAR check). We were taught that would be a penalty. You’d say VAR is working. The referees and VARs are adhering to the rules that are now in place.”

Neville was also asked about The Times reporting that his players stand to earn £50,000 each in bonuses if they win the tournament and if it was an appropriate amount.

He said: “They don’t comment on amounts, really. All I’d say is the players are happy with the bonus scheme.”