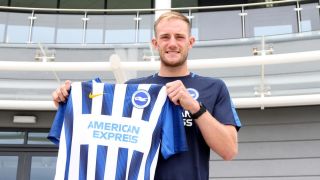 Brighton have completed the signing of defender Matt Clarke from Portsmouth for an undisclosed fee.

Centre-back Clarke has agreed a four-year contract with the Seagulls to become the first arrival under new boss Graham Potter.

The 22-year-old, who made 175 appearances during four seasons with Pompey, will provide competition for Lewis Dunk and Shane Duffy at the Amex Stadium.

Potter told Brighton’s website: “We are pleased to welcome Matt to the club. He’s an imposing central defender and had a very impressive spell with Portsmouth, and as their captain has been a key player for them.

“At 22, Matt has already played a good number of games in the EFL and we are really looking forward to working with him.

“His challenge now is to compete with our existing centre-halves — an area where we have a lot of competition — and break into our first team.”

Clarke began his career with Ipswich before moving to Fratton Park, initially on loan, in 2015.

After winning promotion from Sky Bet League Two with Pompey in 2017,  he lifted the Checkatrade Trophy at Wembley last season, as well as helping Kenny Jackett’s side reach the League One play-off semi-finals.

Portsmouth, meanwhile, have signed forward Ellis Harrison from fellow League One side Ipswich for an undisclosed fee.

The 25-year-old former Wales Under-21 international, who began his career with Bristol Rovers, has agreed a three-year deal.

Pompey assistant manager Joe Gallen told the club website: “We’ve always liked him as a player. He can fit into our system as a number nine and hold the ball up, win headers and score goals.”