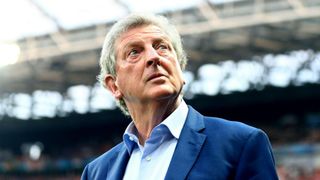 Roy Hodgson's replacement as England manager can expect to be given a performance-based contract after Football Association (FA) chief executive Martin Glenn accused the governing body of being "naive" in the past.

Hodgson stepped down following his side's shock elimination to Iceland in the last 16 of Euro 2016 and the search for his successor is already under way, with Jurgen Klinsmann the current bookmakers favourite.

But Glenn says the FA must take a new approach when considering the financial package they will offer their chosen coach, highlighting the bumper salaries given to the likes of Fabio Capello and Sven-Goran Eriksson in years gone by.

"I can't say what the right salary is, really," Glenn is quoted as saying. "Roy's got a fortune but it's half the fortune that Fabio got.

"The argument against Sven and Fabio in the past was that it wasn't benchmarked. We were just naive.

"I think we will pay a benchmark salary for the right person. To start off, it has to be results-orientated.

"My view on these things is: take the emotion out of it, what are benchmark earnings for top-quality football management? To get a really good person, if they are currently earning £4million in a club you have to be in that zone."

Glenn insists the FA has the funds to compete with the world's best when it comes to attracting the best man - or woman, as Glenn alluded to following Hodgson's resignation - for the job.

"Luckily, we've got the FA finances [right] now," he added. "It's been ugly but we've restructured, we've reorganised, we're in a better financial position than we've ever been, which doesn't mean I want to be lax with the money.

"I know a little bit about what Joachim Low gets. There are other things in there that we don't have in ours. Certainly in the case of Germany there's a percentage of the sponsorship figure that goes direct to the manager. So when you look at the total package it's a little bit different.

"We need to be in the zone of what the world champions are paying and, competitively, how to make it attractive to someone. We are going into the market and you've got to pay a market attractive rate, but no one wants to be naive."