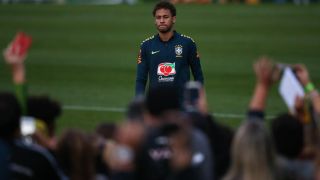 Brazil star Neymar admits he is not yet 100 per cent fit, three weeks out from the start of the World Cup.

The Paris Saint-Germain forward has resumed training as he continues his return from foot surgery, having sustained a broken metatarsal in February.

It was expected Neymar would be back for Brazil's friendly against Croatia on June 3, but the 26-year-old is not quite at full fitness just yet.

"I'm still not at 100 per cent," Neymar told reporters on Sunday.

"This will come with time, although there is still an element of discomfort when I make certain moves.

"There are still a few days until my return."

While he accepted there were some doubts, Neymar also insisted he was ready to go.

"I'm ready to play. There's nothing that can stop me," he said.

"The fear I feel is because I have stopped for three months, but it won't prevent me."