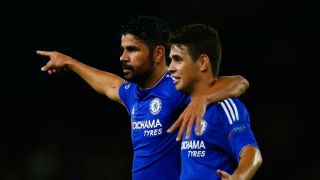 Chelsea interim manager Guus Hiddink will not be taking disciplinary action against Oscar or Diego Costa and insists the duo quickly laughed off their training ground bust-up.

Reports surfaced in the British media that the pair had to be separated by shocked team-mates following an altercation in training on Thursday sparked by an overzealous tackle by Oscar.

However, the Brazil international quickly played down the incident on Twitter and Hiddink says Oscar apologised immediately.

"No [there will be not be any disciplinary action], they solved it immediately, it's perfect. Sometimes we go over the edge with good emotions and intensity, when you solve it there's no problem for me," he said ahead of Sunday's FA Cup third-round tie against Scunthorpe United.

"It [the tackle] was overdone and when you know Oscar, he is not the biggest tackler in the team, he got Diego and then they stumbled over the ground, stood up, chested a bit but without a serious threat of punching.

"Then we came in between them but there was no need to say anything. In the intensity of the session we had - we had an intense sharp session, close on the edge - these things happen.

"Then Oscar apologised in front of the group, I said 'take the podium'. He apologised, they looked at each other and they started laughing. Jokes were made, it's a battle that happens when you play on high intensity. It happens, it's solved."

Costa and Oscar were two players who came in for particularly heavy criticism from fans following the sacking of Jose Mourinho, but the duo have been in good form in Chelsea's four-match unbeaten run.

Hiddink was keen to stress that he does not believe either player was underperforming for Mourinho, but the Dutchman feels the pair are understanding they have to give more to the team.

"They're focused on what they have to do," he added. "Players like Oscar, who are blessed by nature in their talent, they know they have to work hard too for the benefit of team so he can excel his performance.

"They work hard, they were just relying maybe a bit too much on the talent. They're adding more things."