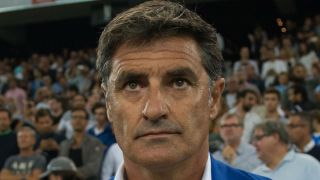 Heading into Sunday's trip to Caen, Marseille lie 11th in the Ligue 1 table – six points above the relegation zone – having been knocked out of the Coupe de la Ligue by Toulouse in midweek.

The former Spain international, who replaced Marcelo Bielsa at the Stade Velodrome last August, believes continued hard work can turn this slump around in the absence of any tricks up his sleeve akin to the popular child-fiction wizard Potter.

"Marseille is a great club and when a big club is not at the top of the table, we always say that it is in crisis," Michel said, as quoted by L'Equipe.

"But actually it is not in a good time. Everyone is designated as a culprit but it's better to analyse the situation and look for solutions.

"I cannot ask for much more in my players. I wish they would play well and have a performance which is the top of the table.

"The role of a coach is to make sure players give the maximum and there is a good atmosphere.

"Me, I do not seek excuses. I do my work as best as possible, but I'm not Harry Potter."

Marseille have been linked with bringing Florian Thauvin back to the club on loan from Newcastle United.

The winger is in boss Steve McClaren's squad for Saturday's Premier League match against West Ham but has struggled to settle since joining during the close season.

Michel did not rule out a move for the 22-year-old but insisted club president Vincent Labrune would have the final say.

"He is a player I had seen a week before coming [to Marseille] and he was not there when I arrived," Michel added.

"This is a very good footballer, that is why Newcastle bought him. But until the end of the winter transfer window, there is the president who talks about these matters."