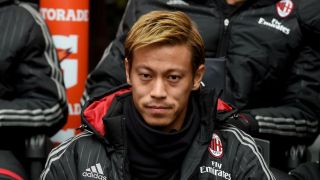 Keisuke Honda says AC Milan remain a number of years away from being able to challenge at the top of Serie A and has questioned why some of the club's high-profile recruits have failed to make an impact in recent seasons.

Milan have not won the Scudetto since 2011 and have turned to a host of coaches and big-name players to try and arrest their fall from title contention.

Honda was brought to the club by Massimiliano Allegri in 2013 and, since the Italian's departure, has been coached by Clarence Seedorf, Filippo Inzaghi and now incumbent Sinisa Mihajlovic.

The club have also brought in various big-name players, some in the latter stages of their careers, to try and restore glory to Milan.

Honda - who has fallen out of favour under Mihajlovic - claimed there is no quick-fix for Milan, who sit sixth in Serie A, eight points off leaders and rivals Inter.

"Milan were in a tough spot when I signed so I knew what I was getting into," the Japan international told Kyodo News.

"Allegri was the one who wanted to sign me but by then the situation started getting really ugly. I came here with the hope I might be able to help turn things around, but then the managers started getting sacked and as a result, Milan have been on a difficult path for the last two and a half to three years.

"But the winning pedigree is still strong at this club and very few teams around the world have this kind of blood. We have potential but whether we can get back on our feet while I'm here is another matter.

"We're no longer in a position where we can sign someone and hope that he alone can fix it. I mean, who have we signed the last three years?

"There was Kaka, Robinho, [Mario] Balotelli, and Fernando Torres, who is playing great for Atletico [Madrid] now. People don't seem to notice those things. Who else? [Sulley] Muntari, [Michael] Essien.

"We've had some really good players come through here."

Honda's contract expires at the end of next season, with Premier League sides Tottenham and West Ham both rumoured to be interested in the midfielder.