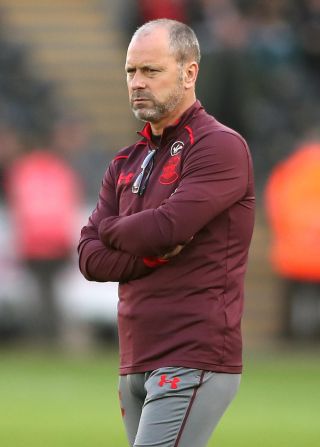 New Reading manager Mark Bowen declined to give his players a day off on Sunday as a reward for their dramatic 1-0 Championship victory over Preston.

Reading were the better side in the first half but were denied by a series of fine saves from Preston goalkeeper Declan Rudd.

Preston should have gone ahead after the interval but David Nugent squandered a free header.

But Reading clinched their first win in seven league matches in the eighth minute of stoppage time.

Bowen said: “When you get a last-gasp winner, a lot of managers – myself included – almost want to come in and say to the lads ‘You’ve earned it, have a day off tomorrow. We’ll start back on Monday’.

“But we can’t do that, we’ve got catching up to do [in this league].

“Tomorrow will be a normal day as usual. We’ll count up who’s fit and who’s not, we’ve got to recover right.

“With just one win in seven, we can’t go patting ourselves on the back. We’ll only do that when we get a run of results and start climbing that table.

“Sometimes you come into this job as a manager and you end up with so much enthusiasm and bombard the players with tactics and information.

“I probably did too much of that.

“We wanted to get the ball forward to the strikers quicker but we probably did too much of that in the first half.

“At half-time, I went in and told the lads to be a little more patient and to take that extra pass.

“I was pleased the way it turned out and I thought that we deserved it.”

Preston fell to their first league defeat in nine outings.

Boss Alex Neil said: “It’s hard to take but a harder one to take is when you play really well and lose.

“I thought it was a poor game, to be honest. It was probably as poor as we’ve moved the ball.

“We didn’t build well enough, we didn’t look a threat as much as what we generally do.

“It was just one of those games where there was going to be the odd chance in the box and who took their opportunity when it came.

“There wasn’t much quality in the game. At the end of the day, we lost the game and we’ve got to take that on the chin.

“It would be interesting to see again how many times we gave the ball away to the opposition.

“Our passing was probably as poor as I’ve seen it.

“And that’s from key players who generally perform very well for us. I don’t really know what else to say.

“The simple fact is that we just didn’t play well enough. And when we moved the ball forward, it just didn’t stick.

“I’m not going to start slagging off the players but, today, they just didn’t perform.”