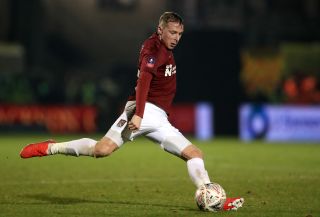 Northampton midfielder Nicky Adams believes fans will riot if they continue to be sidelined from matches.

Plans to get supporters back inside stadiums were abandoned earlier this month following a spike in coronavirus cases.

But Adams, 34, told The Cobblers Show on BBC Northampton: “They can say ‘oh, football fans don’t behave’ but the longer this goes on, there’s going to be riots.

“Eventually a load of blokes are just going to think sack this, and they are going to just start turning up to games, and the police can’t control that.”

Northampton are 19th in League One after the opening five matches.

And Adams fears multiple clubs across the land will go out of business without the revenue of ticket sales.

He added: “I’m in the industry and we hear the whispers. There will be a collapse of teams up and down the country if they don’t let fans in.

“This is real life and people’s businesses are going to go bust.

“People say ‘people are dying’, and I understand that, but there’ll be a lot more people dying through mental health if life doesn’t go on.

“The games just feel like friendlies without fans in. I know fans don’t want to hear that, but that’s the way it is.”