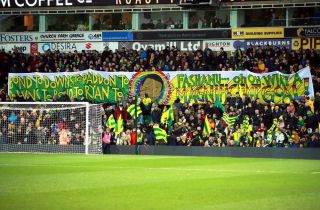 Norwich fans celebrated the anniversary of Justin Fashanu’s wonder goal against Liverpool in 1980 with an inclusive Pride banner celebrating the moment.

The current Canaries side took on Liverpool at Carrow Road almost exactly 40 years after Fashanu’s stunning volley against the Reds, which Barry Davies described at the time as “magnificent”.

Proud Canaries, a Norwich City LGBT+ fan group, worked with supporters group Along Come Norwich and the Barclay End to produce the 20-metre long banner, upon which a description of Fashanu’s goal is written.

The words ‘MAGNIFICENT GOAL!’ meanwhile were written in the colours of the inclusive Pride flag, which includes black and brown stripes – to represent ethnic minority backgrounds – as well as rainbow colours.

“The most voted for person was Justin Fashanu… a man so treasured in this city especially by the football club for his artistry as a player, and by the LGBT+ community for his courage in not hiding who he was.”

It's 4️⃣0️⃣ years to the day when Justin Fashanu did this against Liverpool at Carrow Road… ☄️— Norwich City FC (@NorwichCityFC) February 9, 2020

Di Cunningham of the Proud Canaries meanwhile celebrated the “super-inclusive” nature of the East Anglia side.

“I’m overwhelmed that Justin still has such an important place in the hearts of Norwich fans, and that connection helps make this club super-inclusive,” said Di.

“Huge credit too to the club for their ongoing commitment to equality – and in offering the ﬂexibility and assistance to ensure that these fantastic displays of support can happen.”