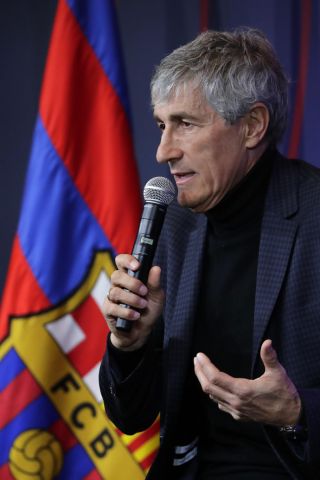 Quique Setien is embracing a new job that is beyond his “wildest dreams”, having been walking around his home town surrounded by cows just hours before being appointed Barcelona manager.

Setien was announced as the Catalan club’s new boss on a contract until June 2022 on Monday evening, shortly after confirmation of Ernesto Valverde’s sacking.

“I want to thank this institution for giving me the chance,” Setien said at a press conference on Tuesday.

“Not even in my wildest dreams could I have imagined this. I have to thank the club. I’m excited about this challenge and this project.

Setien added: “Yesterday, I was walking around my home town with cows around me and now I’m here at Barcelona managing the best players in the world.”

The 61-year-old former Real Betis boss takes over with Barcelona top of LaLiga, ahead of bitter rivals Real Madrid on goal difference.

“I thank Ernesto Valverde for leaving me with a side that is top of the league,” he said.

“My objective is to win everything. Everything you can win, this club has no other path to follow. Year after year, to win as many trophies as possible.

“I think the best way to victory is by playing good football. It doesn’t always happen but it’s not just about one day, it’s about keeping it going.”

Setien was asked about Lionel Messi as he has said in the past that he would cry the day the Argentinian retired.

💡 @QSetien on watching #Messi and the team play over the years. pic.twitter.com/xXP8CuvasS— FC Barcelona (@FCBarcelona) January 14, 2020

“I said that about a lot of players,” he said. “I have enjoyed watching Barcelona for several years, watching them on television.

“To be able to manage the best in the world, and his team-mates – he has great team-mates – I have spoken to him and others.

“I have always said that the admiration is one thing but reality is different. Everyone needs to have their place. Messi is Messi, (Sergio) Busquets is Busquets.”

Setien will be in the Barcelona dugout for the first time at home to Granada on Sunday.

On his arrival, he said: “Every time a new manager comes in, there is a stimulus for everyone inside the dressing room. You notice it immediately.

“This stimulus that we saw in the session today, we need to maintain that and I have never met a coach who is the same.

“Many people say ‘this coach is exactly the same’, but the reality is we are all very different. I am very clear as to what Barca needs. I’ve seen this from outside, we’ve watched them and analysed them.

“There are a lot of things we are very clear about and we will try to transmit that. These are just words, though, and we want things that are long-lasting.”

Luis Suarez faces four months out after undergoing knee surgery, but Setien was coy over whether he would sign a replacement in the January transfer window.

“We have a lot of things to discuss,” Setien said. “We haven’t seen enough to analyse it perfectly.

“I’m clear that we will always have a consensus in the decisions we make.

“I’m a person dedicated to the club and it’s not something I’m worrying about right now. We have an important player out but we have to think of the players here.

“The thing about it is the philosophy. We might think about making changes like switching to 4-3-3 or 4-4-2 but we need to evaluate things and find out what to do.”

✍️ A goodbye letter from Ernesto Valverde: ‘My time as manager of FC Barcelona has come to an end…’— FC Barcelona (@FCBarcelona) January 14, 2020

Earlier on Tuesday, Barcelona published a letter on their website from departing coach Valverde.

He wrote: “Dear Barca fans, my time as FC Barcelona coach has come to an end. It has been an intense two-and-a-half years right from the start.

“In that time I have enjoyed some joyful moments celebrating victories and trophies but also others that have been tough and difficult.

“However, above all I would like to highlight my experience with the fans and the affection showed towards me during my time as coach.”

The former Athletic Bilbao and Espanyol boss, who guided Barca to LaLiga titles in each of his two full seasons in charge as well as winning the Copa del Rey and Spanish Super Cup in 2018, also thanked the players and the board of directors and concluded by wishing Setien and the team “all the luck in the world”.