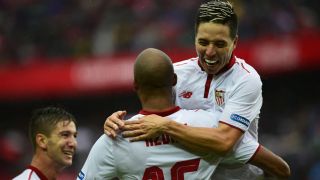 Steven N'Zonzi played down suggestions that Sevilla are genuine LaLiga title challengers after his goal secured a 1-0 win over Atletico Madrid to momentarily put them top of the table.

Diego Simeone highlighted Jorge Sampaoli's side as potential rivals for the title in the build-up to Sunday's clash and they lived up to that billing at the Ramon Sanchez Pizjuan.

After beginning the second half full of intent, N'Zonzi eventually secured the win with a well-crafted goal, but he was eager to ensure his team-mates keep level heads despite only a win for Real Madrid over Athletic Bilbao later on Sunday being enough to knock them from the summit.

"It's very early to say if we can battle for championship," he told reporters.

"It was a very important win and against a very strong rival. We knew it was going to be really hard but we are very happy with our performance in a very difficult game against Atletico, who are obviously a very good team."