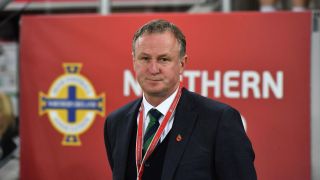 Strachan resigned after Scotland missed out on qualification for the 2018 World Cup, while Northern Ireland fell agonisingly short a month later – going down to a 1-0 aggregate loss in a play-off versus Switzerland.

It was a campaign that saw the former Shamrock Rovers manager's stock rise further, after leading his country to the last 16 of Euro 2016.

O'Neill was tipped to take the reins with Scotland ahead of Wednesday's UEFA Nations League draw, with a four-year deal reported to be on the table.

But the 48-year-old released a statement on Monday confirming he had turned down the Scottish Football Association's approach.

"Having given the matter a great deal of thought and consideration, I have decided not to take up the opportunity to become the next Scotland national team manager," said O'Neill in a statement published by the Belfast Telegraph.

"It's a huge honour to be offered the position, however I do not feel that this is the right opportunity for me at this moment in my career.

"I would like to place on record my gratitude to the SFA for the very professional manner in which they conducted negotiations and I would like to wish them every success for the future."

O'Neill, who lives in Edinburgh, is under contract with the Irish Football Association until 2020, with a purported new deal on offer to keep him in position until 2024.