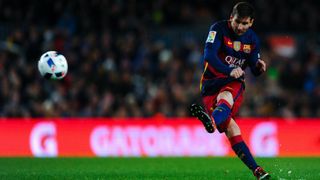 Barcelona coach Luis Enrique has highlighted the importance of Lionel Messi's tactical flexibility ahead of this weekend's La Liga encounter with Granada.

The Argentina international put in a man-of-the-match performance in Wednesday's 4-1 Copa del Rey win over Espanyol as he featured in a more central role than normal, scoring twice and setting up two more.

According to Luis Enrique, Barca seek to utilise Messi in different ways to get the best out of the star forward.

"The team always looks for Messi to take part in play as much as possible," he told a news conference.

"We have a number of options with Leo.

"It depends on the game and on the opponent whether he is at his best in a more central role or a bit more out wide."

Barcelona will be looking to return to winning ways in La Liga when they host Granada after last week's scoreless draw with Espanyol, but Luis Enrique has warned his players a tough match awaits.

"There's no team as dangerous right now as this Granada in need," he added.

"Granada are a team that's been getting better and they need the points.

"They have some dangerous players on the counterattack.

"We are the defending champions and we must get the full three points at home if we are to win the title again."