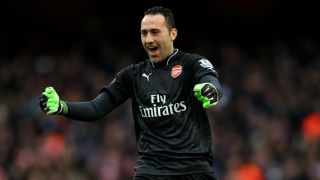 The Colombia international has kept four clean sheets since taking over from Wojciech Szczesny, who was dropped by manager Arsene Wenger for reportedly smoking in the showers following a 2-0 defeat to Southampton on New Year's Day.

Three of his clean sheets have come in the Premier League, with the other in the FA Cup third round win over Hull City.

And, while Wenger has insisted that Szczesny is still his number one goalkeeper, Ospina is determined to win the job and showcase himself in a league filled with high-quality shot-stoppers.

"I see it as a big responsibility to come to a great club like Arsenal," Ospina explained to the club's official website.

"It is a dream come true, now it is my job to make the most of this opportunity that has come my way.

"I always watched the Premier League when I was in Colombia because that was one of the leagues they showed on television.

"At Arsenal we have very good goalkeepers in the shape of Wojciech Szczesny and Emiliano Martinez.

"The Premier League has always had top-quality goalkeepers.

"There's De Gea, Hugo Lloris, Joe Hart - they're great keepers who've proved their worth over the course of many seasons and are continuing to do so now."