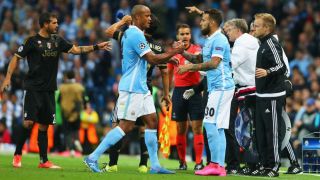 Nicolas Otamendi hopes to be playing alongside Vincent Kompany again "as quickly as possible", conceding that Manchester City are not the same side without their captain in the team.

The Belgium international has been limited to nine starts in all competitions this season by a calf injury, although City have conceded a mere three goals and kept seven clean sheets in those games.

A 4-1 thrashing at home to Liverpool, as well as defeats at Stoke City and Arsenal have been suffered in Kompany's absence.

Otamendi feels it is only logical Kompany is being missed and believes any team in the world would struggle without a player of the Belgian's calibre.

"We have all been subjected to some criticism at some point this season, but any team would miss Vinny. He is a top player, he is aggressive on the pitch and he has been a big loss for us," Otamendi told The Independent.

"We hope to get him back as quickly as possible and that anyone the manager puts in to replace him can stay solid during that time. The games I played together with Vinny, I really enjoyed the partnership, both in the derby against Manchester United and in the Champions League against Sevilla.

"I felt we were developing something there. He is obviously a top player and he helps us a great deal when he is on the pitch."

Otamendi has been playing alongside former Porto team-mate Eliaquim Mangala in Kompany's absence and he feels the Frenchman has plenty to offer, too.

"Recently, I have been playing with Mangala and he is a top player too," he added.

"He is young, but he is developing as a professional and also as a personality, I can see that on the pitch.

"He was different when I played with him at Porto. He was a lot more aggressive on the pitch, but I think he has developed since then and is a good fit for the Premier League."