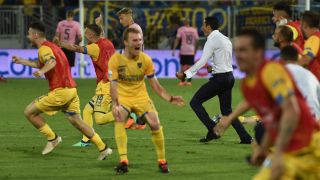 Palermo president Giovanni Giammarva said the club would lodge an appeal against Frosinone's promotion to Serie A in the aftermath of their controversial play-off final victory over his side, which club owner Maurizio Zamparini dubbed "an illegal game".

After winning the first leg 2-1 in Sicily, Palermo were 1-0 down in the second when the game descended into chaos as referee Federico La Penna awarded the Rosanero a free-kick on the edge of the box, before changing his mind and pointing to the penalty spot.

He then reverted to his original decision – which replays suggest was incorrect – and failed to penalise Frosinone when their substitutes were caught throwing loose footballs onto the pitch to break up Palermo's attacks.

The game ended prematurely when Camillo Ciano's winning goal for Frosinone sparked a pitch invasion with 90 seconds of injury time left on the clock, and a furious Giammarva told Sky Sport Italia that he would be contesting the result.

"We have prepared the reservation for the approval of the result and then we will lodge an appeal," he said.

"The arguments of the appeal will be announced later and will be exhibited in the appropriate venues."

Zamparini posted a video message on the club's official website to confirm the plans to appeal, and he expressed outrage at Frosinone coach Moreno Longo's post-match comments, in which he said Palermo's "finances aren't in order".

"We have instructed our lawyers to lodge an appeal and support it with all the necessary evidence," said Zamparini. "I think the referee changed his mind on the penalty because he was besieged and intimidated by the opposition team.

"It was a series of events that has nothing to do with legality. It was an illegal game. From that moment on, the referee lost his bearings and we will take the necessary steps, hoping this can all lead us to have justice, because the spectacle Frosinone gave to Italian football was undignified.

"Their players even started throwing extra footballs on to the pitch to stop our attacking moves. It was not punished by the referees, the fourth official, nor the linesman."

"It's truly abhorrent to see people continue to throw mud at others after they were engaged in such squalid unsporting behaviour. This shows the quality of the people we are dealing with."

"It's a truly ugly time in Italy at the moment," he added. "There are too many of these incidents in Italian football now and I hope the authorities or even the new minister of Sport, who I believe in a great deal, can take action and begin an inquest."