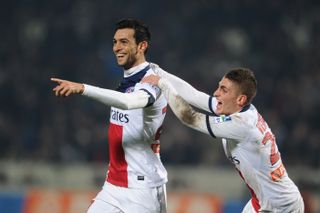 The attacking midfielder has been linked with a transfer away from the Parc des Princes, with the Argentina international mooted as a potential makeweight in a deal to take Roma's Miralem Pjanic to the French capital.

Despite the speculation, Pastore - who has previously played in Italy with Palermo - has no immediate desire to leave PSG, although he was coy on the rumours of a return to Serie A.

"Roma? There are teams that have spoken with the club and with my agent. Roma are doing very well and have a strong squad.

"If they were to call me then I'd have to see what happens.

"But at the moment I am happy in Paris."

Pastore joined PSG from Palermo in a deal reported to be worth €39.8 million in 2011.