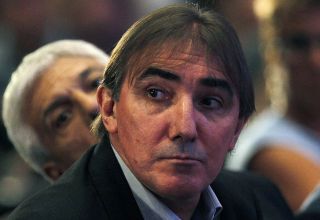 Pautasso moved to the La Liga champions with new boss Gerardo Martino in the close-season and has claimed the Argentinians have no intention of changing the ethos of the club.

Barca have won their opening four league matches of the season and got their UEFA Champions League campaign off to a flying start with a 4-0 victory over Ajax on Wednesday.

And Pautasso - speaking ahead of their trip to Rayo Vallecano on Saturday on behalf of Martino, who is attending his father's funeral in Argentina - reiterated their desire to follow in the footsteps of the likes of Pep Guardiola and Tito Vilanova in terms of approach.

"We will never betray the style of Barcelona," the 51-year-old insisted.

"We came to add, not take away from what they did well for Barcelona in the last year. What we want is to incorporate high pressure.

"In general, those who have lived and played in football knows that everyone has an opinion that is respectable, it important to have a good debate and things that arise are logical.

"Overall our relationship with the people who were at the club before our arrival is really excellent, we share every day, we learn, we collect and transmit to the players."